On the first day of this year’s international #MuseumWeek women take centre stage. The Hashtag #WomenMW leads us to Löbichau Castle and Tannenfeld Castle near Posterstein. Between 1795 and 1821 there was a living salon in both castles. The hostess was the beautiful duchess Anna Dorothea of Kurland (1761–1821), one of the most impressive salonniéres of her time. But also among her guests in Löbichau, important women can be found – like Emilie von Binzer.

The salon of the Duchess of Courland was one of the most famous of its kind at the beginning of the 19th century.

With the 18th century Parisian salons, where members of the court, scholars and artists met, a culture emerged during the Enlightenment, spreading throughout Europe. At the end of the 18th century Löbichau Castle became such a center of intellectual and cultural life in Germany. The salon of the Duchess of Courland was one of the most famous of its kind at the beginning of the 19th century.

In 2014 the Museum Posterstein Castle – promoted by financial resources of the Free State of Thuringia and from Bürgerstiftung Altenburger Land – could purchase a unique collection of portrait drawings. The 47 watercolored drawings date back to 1819/20 and represent the guests in the salon of the Duchess of Courland as mythical creatures. The unique pieces were stored in a box made of dark green colored half leather.

The authors of these amusing portraits are the painter Ernst Welker and probably also his pupil Emilie von Binzer, née von Gerschau (see picture above, which has the signature “Emilie del”). Emilie was a foster daughter of the Duchess Wilhelmine of Sagan, the eldest daughter of Dorothea of ​​Courland. The drawing of the caricatures is described by Binzer in her memoir “Three Summers in Löbichau” („Drei Sommer in Löbichau“). One can imagine the drawing teacher aged 35 and his pupil at the tender age of 19 spending a summer on the idyllic country estate Löbichau and Tannenfeld and throw a humorous glance at the famous and lesser-known guests in the salon of the Duchess of Courland. The salon visitors are pictured as mythical creatures, mostly in animal form or as an object with a human portrait head. It’s a moot question whether the persons knew about the existence of these drawings. The authors of the caricatures did not spare themselves: Emilie is depicted as an asparagus, Welker as an oyster.

Her famous aunt introduced her to the world of salons

The writer Emilie Henriette Adelheid von Binzer (1801-1891), née von Gerschau, was born in Berlin. She lived with her aunt Wilhelmine of Sagan and two other foster daugters. Her father Peter von Gerschau is said to have been an illegitimate son of the Duke of Courland. He served as Russian Consul General in Copenhagen. Duchess Wilhelmine introduced her to the salon life and so the young girl met famous personalities, such as Metternich, Talleyrand, Tsar Alexander, Windischgrätz, Wellington, Blücher and Schwarzenberg.

In 1819/20 Emilie stayed in Löbichau und Tannenfeld together with Wilhelmine of Sagan and her teacher Ernst Welker. More than 50 years later, she wrote her memoir “Three summers in Löbichau” („Drei Sommer in Löbichau“), in which she individually characterizes the people portrayed by Welker. 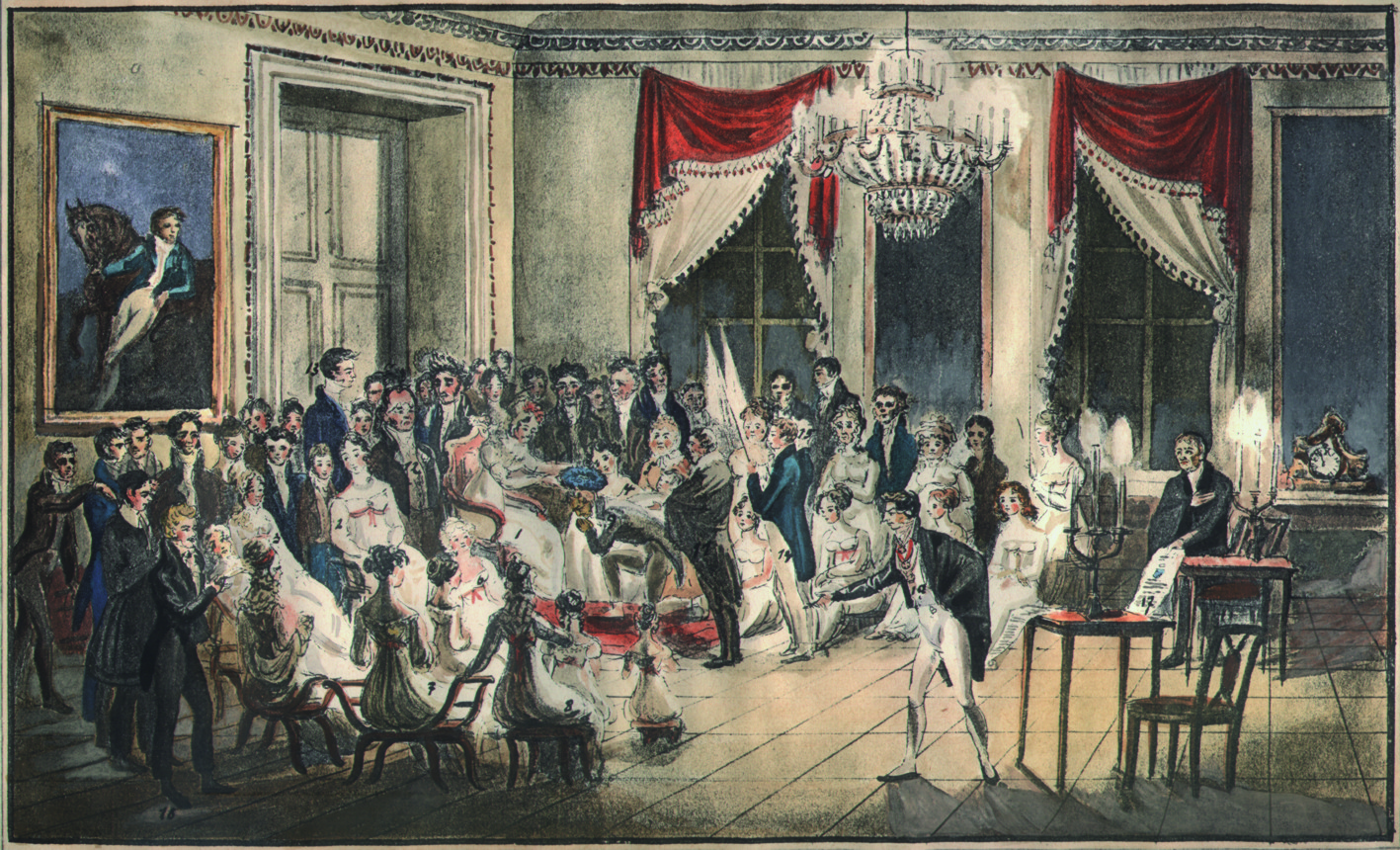 One of the authors in Dorothea of Courland’s salon is honoured with a special prize in September in Löbichau 1819, painted by Ernst Welker, Museum Burg Posterstein

In Löbichau Emilie met among others the poet Jean Paul, Families Körner and Feuerbach, Carl August Böttiger, Friedrich Arnold Brockhaus, Christoph August Tiedge and Elisa von der Recke. Here she also became acquainted with her future husband: the Burschenschaftler (member of a student fraternity) August Daniel von Binzer. They married in 1822 in Sagan Castle. By using the pseudonym „Ernst Ritter“ Emilie von Binzer published a collection of novellas entitled „Mohnkörner“ („poppy grains“). In particular, people and experiences of the time of the Congress of Vienna influenced her literary work. She formed a close friendship with Adalbert Stifter and Franz Grillparzer.

In 2015 the Museum Posterstein Castle showed the collection of caricatures drawn by Ernst Welker for the first time within the framework of a special exhibition. Afterwards, the pictures were integrated to a touchscreen in the museum’s permanent exhibition. Since 2018 they are digitized and accessible via platform “Museums in Thuringia”. For the cultural hackathon Coding Da Vinci East the leaves are now to find in high resolution and with CC-BY-SA license also on Wikimedia Commons. 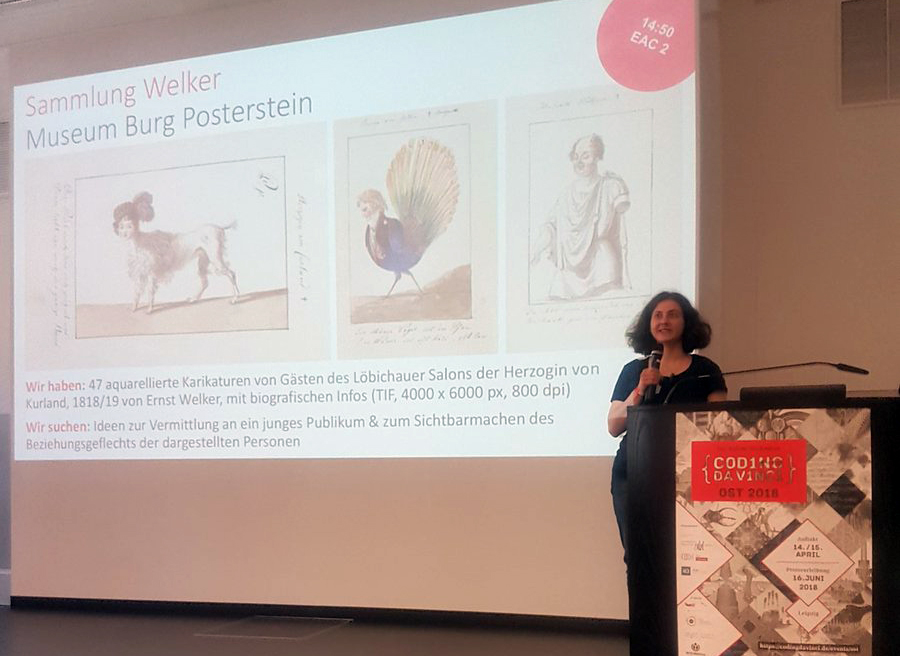 Our first hackathon: the Welker collection takes part in the hackathon Coding da Vinci in the university library in Leipzig.

In context of the hackathon some of the 140 participants – including designers, programmers and students of various disciplines – work with the data of the Museum Posterstein Castle. For the next nine weeks they’ll spend their free time to create modern playful applications by using the playful historical drawings. We will support them with professional information and we are very excited about the results, which will be presented on the 16th of June!

The projects can be followed in the Coding da Vinci Hackdash. There is even still the opportunity to join the project.